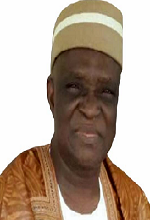 Professor Olufemi Obafemi was born in 1948 in Akutukpa Bunu, Kabba, in Kogi State, Nigeria. His elementary education was in Kabba, after which he went to the Provincial Secondary School in Dekina, and later to the Pitkurn College, Egbe.

He is an erudite scholar of international repute, a playwright, a poet, an English Professor, a world class writer and a notable critic of Nigeria contemporary theatre. He started his career from the University of Ilorin as a young lecturer, graduate assistant in 1976. He and other three junior lecturers started the English department of the University of Ilorin. He was one of the first 20 academics in this university.

Prof. Olu Obafemi began writing seriously as an undergraduate student at the Ahmadu Bello University, and also was the editor of a literary magazine. His first play, Pestle on the Mortar, was produced in 1974 and also broadcast by the Kaduna Broadcasting Corporation. He has published a number of plays, among them Nights of a Mystical Beast and The New Dawn in 1986 and Suicide Syndrome and Naira Has No Gender in 1993.

The first of these employs mythological devices to address the social problems confronting post-independence Nigeria, while the second looks forward to finding solution. His works all reflect the social consciousness and activist tendencies that have characterized the writings of the generation of writers and scholars who came to the fore in Nigeria in the 1980s. His writing, according to him, has been an exploration of the question, "Why should the society be organized in such a way that so many people can be suffering while a few have so much to waste?"

Although his works have been performed in Britain as well as in Nigeria, he writes primarily for Nigerians, seeking not to denounce those responsible for the country's privations but to explore ways to correct the problems. Although he considers himself a dramatist, he has also published a volume of poems. Songs of Hope. Two of its poems being included in the Joint Admission and Matriculation Board (JAMB) syllabus.

Humble, simple but firm as a principled man, many of his students regard him as a great mentor and an eloquent speaker, Prof. Obafemi made the study of literature exciting. He would start each author’s work with his biography, creating a nexus between the text, the writer or the context.

We congratulate our highly esteemed Professor Olufemi Obafemi on this milestone achievement.